Neelanjana Ray is one of the contestants of the very famous reality show ‘Voice India Kids season 2’. She is an extremely talented girl with such a melodious voice like the cuckoo bird. She belongs to a family with music background and that drives her to be in this field. She was mentored by ‘Papon’ who was the leader of the team. The show has begun from 11th November 2017 and it was hosted by Jay Bhanushali and Nihar Gite. Neelanjana Ray did amazingly well and made her to the finale of the show. 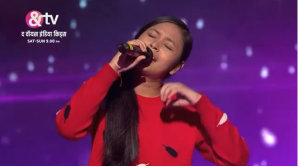 The very talented girl Neelanjana was born in the year 2003 and is 14 years old. She was born in Alipur in West Bengal. She stays in a joint family and belongs to music family background. She is in 9th standard and is pursuing her schooling from Netaji Bedapit higher secondary school.  Her whole family loves singing and especially her father who was very fond of singing. She is fulfilling her father’s desire who wants her to become a singer in future. Voice India Kids season 2 is giving her a platform to fulfill her father’s dream and with her talent and stunning voice, she made herself in the finale and became the first runner-up of the show.

Neelanjana Ray is one of the super talented contestants of the &TV reality show ‘Voice India Kids Season 2’. She has god gifted voice with which she impressed all the mentors and got selected during Kolkata auditions. She performed very well in the show and managed to be in the list of top 5 contestants of the show. The show was started from 11th November 2017 and it was hosted by Jay Bhanushali and Nihar Gite. The show was judged by amazing four singers and music directors namely Himesh Reshammiya, Shaan, Papon and melodious Palak Muchhhal. Neelanjana with her stunning voice won the first runner-up position. She impressed the audience with her sweet melodious voice.